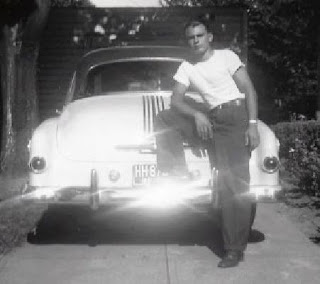 Sentvid held a special place in his heart, and three elder brothers are buried there in the church cemetery, but America was his home since his teens. He embraced everything American as the framework of his life. He may have longed for that remote village nestled in the Julian alps, but he made his home in a suburb of Cleveland, Ohio and spent his days working in machine shops and factories.

His accent remained thick and his conversations were peppered with Slovenian, German and Italian words, but he was always working to improve his English by learning new words and using them in sentences - often with hilarious results.

His eulogy could have focused on his work in a machine shop, the lush vegetable garden he created every year, or his strong opinions regarding whether shoes or food were allowed in the carpeted rooms of his home. Instead, the legacy of his life was portrayed with stories of his smile and laughter, his devotion to his family and friends, his participation in games like table tennis and bocce, his tendency to chat with strangers; and every store clerk and bank teller. But it was his encyclopedic memory for every date of significance that was his shining talent.

He knew the name, location, and date, of every current and historical event, including the births of every family member. This was notable as there were lots of births and events of importance within his family and a very active Slovene community in the Cleveland, Ohio area.  Any question regarding the date and participants of an Olympic event, or cultural celebration, the man in the know was Anton. Any debate of when, where, and who, was instantly ended at his word. Research had proved he was always right.

It was his attention to these details of importance in the lives of everyone he knew that made him beloved. He saw the people in his life, he listened to what mattered to them. He remembered and made others feel good. That's why over 800 people made an effort to honor his passing.

The story of my father-in-law's life is a turbulent saga interspersed with decades of peace. Wars and refugee camps were short term experiences for his life, spanning horrific events. But they did not define his life. He was renown for his smile and his ability to remember what mattered to others - including the correct date. We know a lot of dates regarding his life, like the day he arrived in America, got married, had children, and celebrated the births of grandchildren. We know when he was diagnosed with numerous cancers, and when he died.
At this time, I feel the most important lesson I've learned from my father-in-law is - that my life experiences do not define who I am. They only portray the journey I've chosen to live.

I will treasure this lesson because it means I am forever a work-in-process.
Posted by Unknown at 11:56 PM No comments:

Two Roses on a Wheelchair Wheel

Thanks to my friend and artist Gale Herman for this picture.